Day Eight Of Nitpicking The Twelve Days Of Christmas

The world record for the most milk yielded from a cow is from a cow named Smurf owned by La Ferme Gillette Inc Dairy Farm in Canada.  The farm is located in Embrun, Ontario.  She gave up 478,163 pounds of milk as of February 27, 2012.

The world record for most milk extracted in two minutes belongs to Maurizio Paschetta, who extracted 4.5 liters from cows in Saluzzo, Italy on May 6, 2012.

The world record for most people gathered in one area dressed as french maids is 264 people and was achieved at a gaming event at the Shanghai World Financial Center on January 19, 2013.

So what does this have to do with anything?

Obviously, we're getting into the eight maids a milking.


Milkmaids!  You all know what that means!

Okay, first off, I don't think there's any real "milk maid" who would choose to dress like that.  Your typical milk maid tended to look more like this: 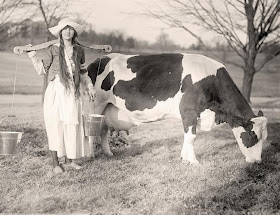 Not the most flattering look.

It's always sort of puzzled me for some time why the "milk maid" was such a popular costume/fetish, until I realized it's simply the famous "innocent farmer's daughter" joke taken internationally.  Though, now I'm wondering if they view the farmer's daughter as simply being the international version of their "innocent" stereotype.

It can get taken to some pretty bizarre levels, though.  For instance, I present the performance from Donatan and Cleo during the Eurovision Grand Final where they performed My Sloianie - We Are Slavic.

From my attempts to actually research this song, the premise is apparently a satire, sort of a Polish version of Amish Paradise.  The lyrics (at least, in the English translated version) and the music video poke fun at the idea that people in Poland are "behind" the rest of Europe.  This, apparently, is a commonly held belief across Europe, and it's not uncommon for Polish people to be looked down on in countries such as England (where they also make up a pretty sizable minority...at least, until Poland started rising economically and England started to sag).  In the song and music video, the "classic" ideas of Poland are played up to a ridiculous level, as if to say "we can present ourselves as the "work hard during the day and be great to take to bed" model people expect, but let's be honest...it's not true."

I mean, why else would you put something like this in the performance of your song?

And yet, it's still less trashy than Nicki Minaj, Miley Cyrus, or any number of other female pop stars who think you only need to be sexy to sell albums.

Well, okay, they're right, but still.

The whole thing gets taken up to a whole other level in their music video, which at last viewing (I might have watched it more than once) pretty much covers twenty bases for "things guys might watch a music video to see."

So why are they in the song?

Well, they aren't in every known rendition of it.

In the Pamela McArthur Cole version (1900), they're replaced with "Hounds a running."  A bit more "English" with how they hunt, but then again it's the same version that has "Nine bears a beating."  I still have no idea what that means.

The  Cecil Sharp version (1905) has "boys a-singing" instead.  The Cliftonian version from 1867 has "hares a-running."  And in the Halliwell version from 1842 (I actually have to differentiate it there, because there are two Halliwell versions) it's eight ladies dancing, nine lords a leaping, ten ships a sailing, eleven ladies spinning, and twelve bells ringing.

But still, why milk maids?

Honestly, I seriously doubt it had anything to do with somebody's fetish for a woman able to lift several gallons of milk in buckets attached to a bar that rested on her shoulders.  It probably just had more to do with the value of fresh milk in those days, since refrigeration was not exactly common.  If you could afford eight "maids" to milk cattle for you, then you obviously had at least eight cattle, which meant you were doing pretty well for yourself.

I will point out though that "milk maids" were also the term used for women who delivered milk, much like "milk men."  So instead of that classic fetish outfit, you might have had this: Okay, I think we're out of any of the possibly "sexual" gifts, though I'm sure the Internet can prove me wrong.  Next time we'll go back to discussing animals.